PES, once one of our favorite companies is morphing into something else. PES has always been known for innovative, inexpensive products and even though it’s not a cash cow for the retailers, we like inexpensive and innovative – so we got down with the brand. Over the last two years, PES has really grown and we’ve watched their products go from semi-hardcore to a softer more general appeal. We really don’t care about the label appearance though, as your mother told you, it’s what’s on the inside that counts. When we see companies push for more market share and higher profits, we usually see them change their products. Luckily, the protein hasn’t changed (yet) but let’s take a look at a couple favorites that did.

Here is an old label and then the new label. While it doesn’t seem like a lot has changed, they took out one of the most expensive ingredients – HICA – which is a leucine metabolite and has very positive science behind it. They replaced HICA by upping the Leucine (they claim to, it was a proprietary blend before so who really knows). While they added L-Carnitine L-Tartrate, they also took out the higenamine and yohimbe bark. Even better is instead of announcing the new changes to the product, they announced new flavors – to entice you to buy it… because it tastes good.

2nd is the Amino IV

So PES took out HICA once again and went from a claim of 15g of total aminos to a total of 8 aminos. To top it off, the first one in the blend is taurine – relatively useless. They took out Glutamine & Betaine Anhydrous – two heavily studied ingredients that we loved being in there. With the continued use of proprietary blends, who knows what the amino ratio is now since it’s not claimed on the container. This is the most disappointing of the two changes, as this product was a great budget amino product.

With those changes being said, PES is still producing some good, new products. One of which is their Ergonine product. Check out this label. 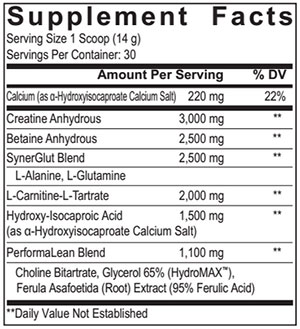 Perhaps the goal at PES was to split the amino IV and create two stronger products designed to be stacked together – but we don’t like it. It’s costing the consumer more and we don’t think that the BCAA product is even in the realm of what other products like Intra Blast and AminoTaur bring to the table.

PES – if you’re reading this – at least don’t change the protein….

Your Friends At Coalition Nutrition

Let customers speak for us